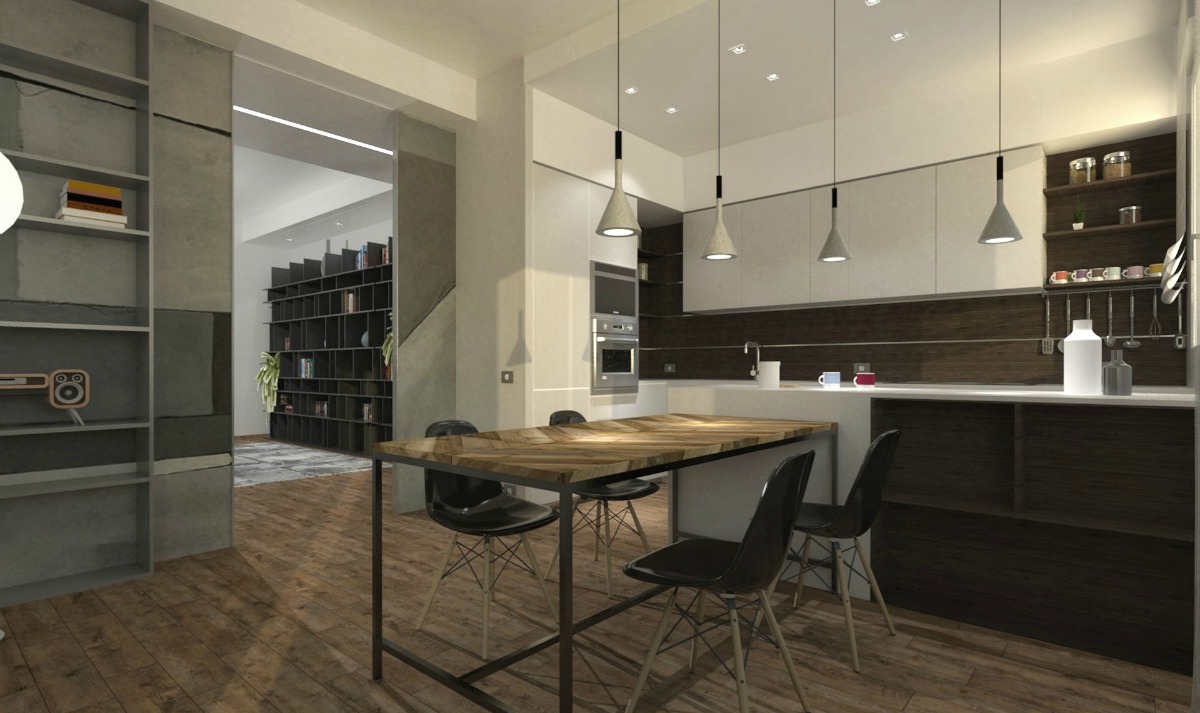 Andrea is a guy who has inherited an 60’s apartment in the province of Monza and Brianza. It had already been considered the  External Thermal Insulation Composite System, revised interior walls, fixtures replacements, underfloor heating and renovation of the rooms.
He wanted to entrust me the project of decorating the kitchen and living area, 45 sq m, with a ceiling height of 3,15meters.

Andrea has been pointed out to me the key points for its interior project:

These indications led me to think of a contemporary industrial-style kitchen and living room! 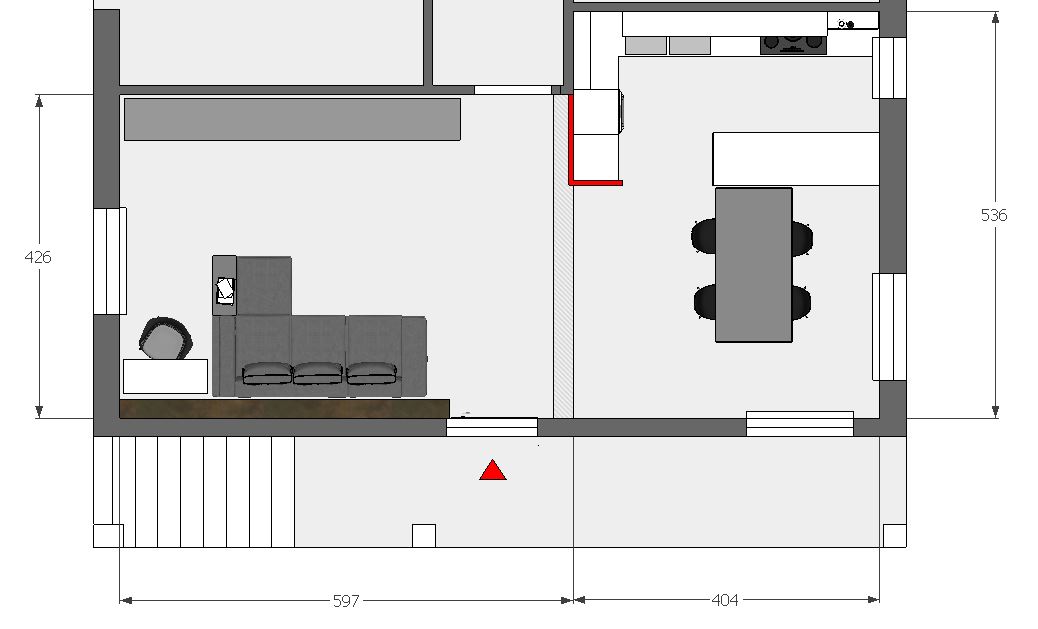 The kitchen has available a very large space where it can be developed. But since you have to deal between costs – functionality – aesthetic I opted for a corner kitchen with island with a very matte pearl gray combined with a wall panel in dark oak wood with shelves in the same finish. The kitchen has still a very generous size. 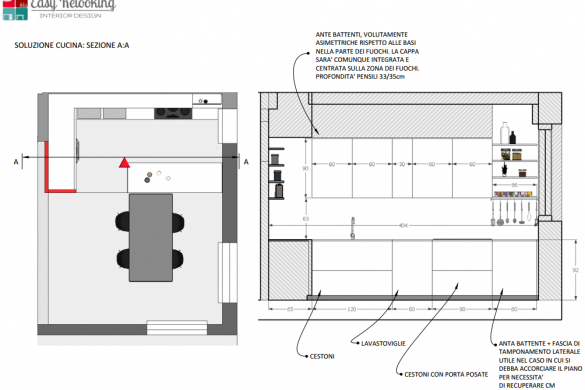 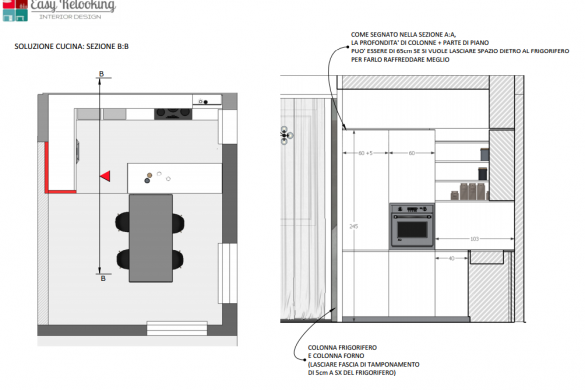 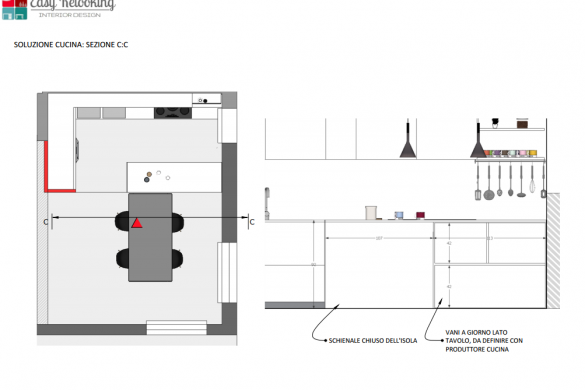 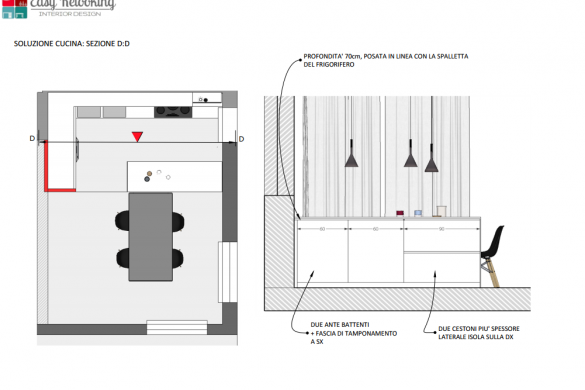 In the planning phase I wanted to give the customer the option to close, if necessary, the local cuisine, thanks to the creation of two sliding panels covered with wallpaper. 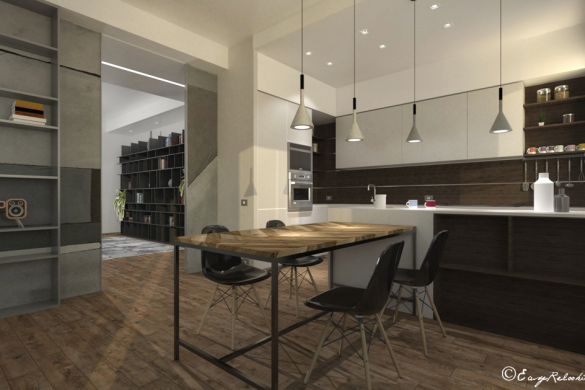 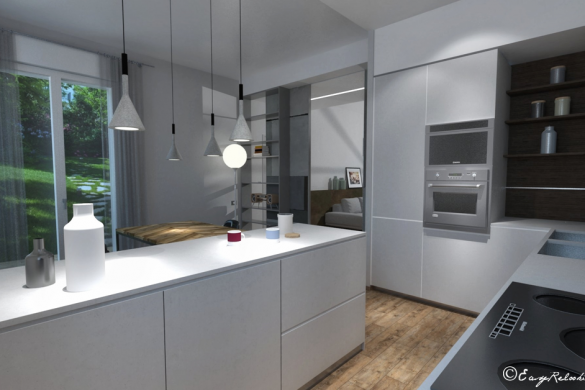 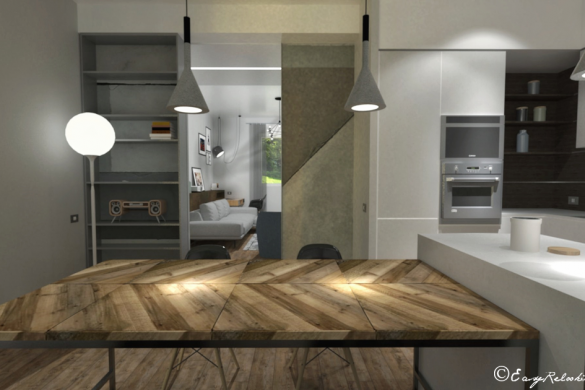 Another thing that surprised me in this project and that until now it had never happened, was the request to avoid the TV, even in the living room. It has therefore opted for the inclusion of a nice wall library in matt black lacquered and an automated cloth hidden in the drywall lowering above the library. The projector will be leaning over the low wall behind the sofa, decorated with bronze paint effect. Interesting solution, do not you think? Perfect for industrial style!

The wall becomes a decorative element that allows you to place pictures and objects but also a functional element for both the projector and for the desk area, in front of which is obtained a restraining compartment in the wall itself. 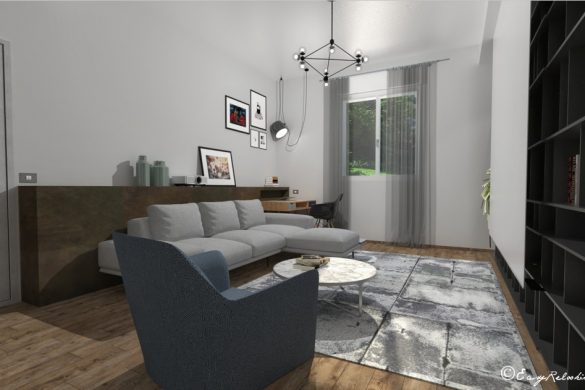 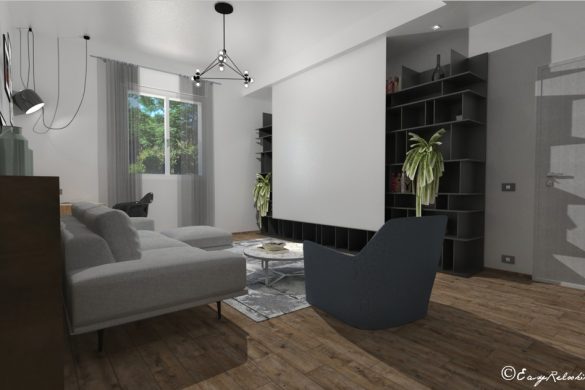 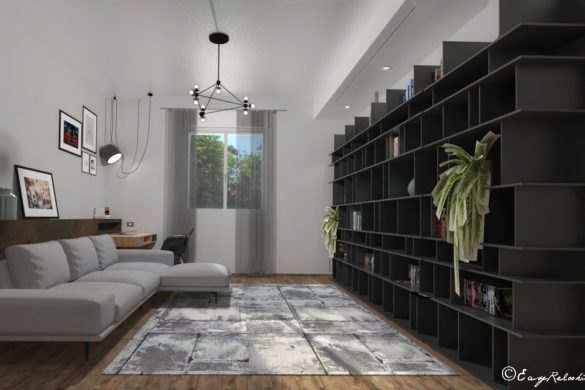 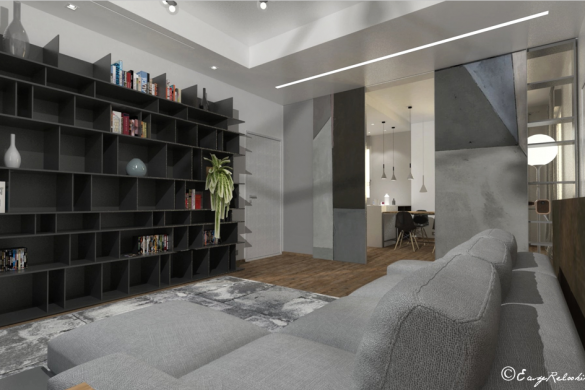 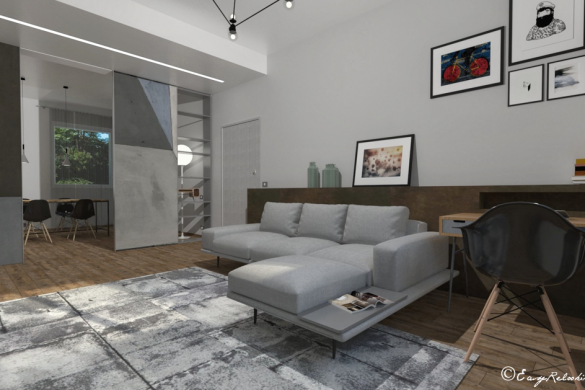 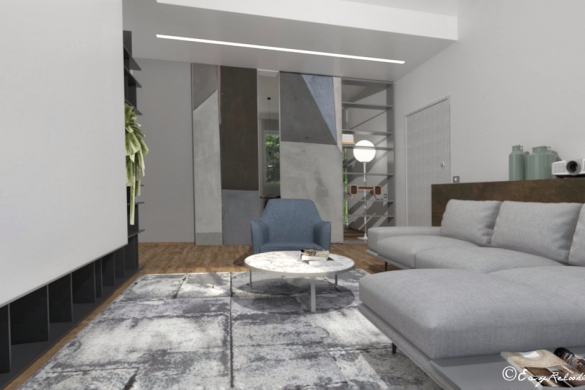 The play of light created completes the project. Thanks to the height of the ceiling of 3,15meters, I created a drywall lowering in the entrance of 30cm with LED strip, above the library with 3 spotlights and above the sliding panels. The lowering allows also to hide the existing beam between living room and kitchen and to include the tracks for the sliding panels. In the kitchen the lowering is high only 18cm due to window boxes that did not allow to lower it further. There are two lines of spots (8 spotlights in total) in the kitchen for diffuse light, and LED lights under the cabinets.

On the island and on the table, the beautiful Aplomb by Foscarini concrete effects have been included.
The Castore byArtemide supports the lights in the dining area and the AIM by Flos characterizes the work desk in the living room.

What do you think of this project for a contemporary industrial-style kitchen and living room? A project of which even I have been pleasantly surprised as it has been able to evolve and for the choices made!

All the paintings included in render are available on Arthewall! With the promotional code “easyrelooking” will have a 15% discount on all paintings and prints
The carpet and added other carpets evaluated in the course of the project are available on De Dimora, with whom I have established a partnership with discounts up to 40% for all EasyRelooking customers.

Design is a game, play a project

Design apartment for rent in Paris

The Manzoni in Milan: restaurant and showroom

Why I am in favor of parquet in...